Web development is simply associated with building a website. It can range from a plain static HTML website or a full-blown complex web-based application. It is mainly about programming to create web pages or applications that can run in any web browser.

Do you know how many websites are on the world wide web as of now?

The answer is 1.8 billion websites are on the WWW as of now.

As you are reading this blog, the number might have sharply increased, and it consistently will.

What are the Different Types of Web Development? 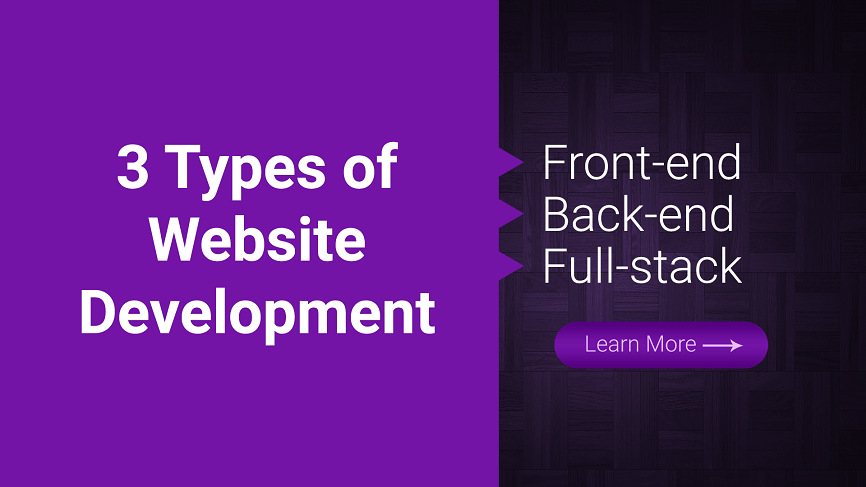 Front-end web development is known as client-side web development. It is a procedure of designing the user interface of the website with front-end technologies like HTML, CSS, and JavaScript.

The aim of developing the front end of the website is to allow website visitors to read the web content effortlessly. To motivate you to build a clean and beautiful website interface, the front-end developers / web designers need to write efficient and clean code. Front-end web design cost will be dependent on the size of web project and complexity of web project or you can request a quote.

Which are the languages used in Front-End Development?

HTML ( HyperText Markup Language ) is the standard markup language for documents designed to be displayed in a web browser. It can be assisted by technologies such as Cascading Style Sheets and scripting languages such as JavaScript.

CSS ( Cascading Style Sheets ) is a style sheet language used for describing the presentation of a document written in a markup language such as HTML or XML. CSS is a cornerstone technology of the World Wide Web, alongside HTML and JavaScript.

JavaScript, often abbreviated to JS, is a programming language that is one of the core technologies of the World Wide Web, alongside HTML and CSS. As of 2022, 98% of websites use JavaScript on the client side for webpage behavior, often incorporating third-party libraries.

Back-end development is also known as server-side web development. The responsibilities of back-end developers are writing code and building the logical parts of the entire website. It mainly focuses on back-end logic, databases, servers, and APIs.

Which are the languages used in Back-End Development?

Python is a computer programming language often used to build websites and software, automate tasks, and conduct data analysis. Python is a general-purpose language, meaning it can be used to create a variety of different programs and is not specialized for any specific problems.

Developers use Java to construct applications in laptops, data centers, game consoles, scientific supercomputers, cell phones, and other devices. Java is the world's third most popular programming language, after Python and C – according to the TIOBE index, which evaluates programming language popularity.

.NET is a free, cross-platform, open source developer platform for building many different types of applications. With . NET, you can use multiple languages, editors, and libraries to build for web, mobile, desktop, games, IoT, and more.

SQL is used to communicate with a database. According to ANSI (American National Standards Institute), it is the standard language for relational database management systems. SQL statements are used to perform tasks such as update data on a database, or retrieve data from a database.

AngularJS is a platform and framework for building single-page client applications using HTML and TypeScript. Angular is written in TypeScript. It implements core and optional functionality as a set of TypeScript libraries that you import into your applications.

Scala is used in Data processing, distributed computing, and web development. It powers the data engineering infrastructure of many companies.

Perl is a high-level, interpreted, general-purpose programming language originally developed for text manipulation. It borrows many features from C and Shell script and is used for system administration, networking, and other applications that involve user interfaces.

Ruby on Rails is used in all types of industries to build web apps and services. This includes applications like marketing websites, CMSs, eCommerce sites, and custom web applications. It's a popular web framework for startups because its ease of use makes for quick application development with small teams.

Rust is a low-level programming language with direct access to hardware and memory, which makes it a great solution for embedded and bare-metal development. You can use Rust to write operation systems or microcontroller applications.

Node JS is primarily used for non-blocking, event-driven servers, due to its single-threaded nature. It's used for traditional web sites and back-end API services, but was designed with real-time, push-based architectures in mind.

React JS is a JavaScript library developed by Facebook which, among other things, was used to build Instagram. Its aim is to allow developers to easily create fast user interfaces for websites and applications alike. The main concept of React JS is a virtual DOM.

Vue JS is a progressive framework for JavaScript used to build web interfaces and one-page applications. Not just for web interfaces, Vue. js is also used both for desktop and mobile app development with Electron framework.

C# (pronounced "See Sharp") is a modern, object-oriented, and type-safe programming language. C# enables developers to build many types of secure and robust applications that run in dot NET. C# has its roots in the C family of languages and will be immediately familiar to C, C++, Java, and JavaScript programmers.

C++ is a fast and strongly-typed programming language which makes it an ideal choice for developing operating systems. Mac OS X has large amounts written in C++. Most of the software from Microsoft like Windows, Microsoft Office, IDE Visual Studio, and Internet Explorer are also written in C++

Browser DevTools is a set of web development tools that appears next to a rendered web page in the browser. DevTools provides a powerful way to inspect and debug web pages and web apps. You can even edit source files and create website projects, all within the DevTools environment.

APIs are needed to bring applications together in order to perform a designed function built around sharing data and executing pre-defined processes. They work as the middleman, allowing developers to build new programmatic interactions between the various applications people and businesses use on a daily basis.

Git or GitHub is a DevOps tool used for source code management. It is a free and open-source version control system used to handle small to very large projects efficiently. Git or GitHub is used to track changes in the source code, enabling multiple developers to work together on non-linear development.

A full-stack developer has the expertise to develop client and server-side web applications and should have database management skills also. Full-stack web developers are well versed in redesigning, building, and speeding up an entire website design and development phase.

Additionally, the responsibilities of full-stack web developers are to search for the web development trends like blockchain, deep learning, and multi-cloud depending upon the projects.

4 Factors to Consider While Choosing a Web Development Language

Here are the 4 important factors to consider prior to choosing the web development language.

1. Performance of the Language

Using the language performance benchmark, you get to know how fast the particular web development language will perform. The result might not be exact, but it will give an idea about whether to use a particular language or not.

The size of the code matters. Because when you plan to deploy your project in a web server / live environment, the optimized and less coded apps will take less time for deployment.

4. Easier to Develop and Maintain