What is 5G Network and differences between 2G, 3G, 4G, and 5G networks?

Simply, the "G" stands for "GENERATION". While connected to the internet, the speed of the connection depends upon the signal strength that is shown in abbreviations like 2G, 3G, 4G, 5G, etc. on any mobile device. Each generation of wireless broadband is defined as a set of telephone network standards that describe the technological implementation of the system.

The aim of wireless communication is to provide high quality, reliable communication just like wired communication and each new generation represents a big leap in that direction. Mobile communication has become more popular in the last few years due to fast reform in mobile technology. For the comparison of 2G, 3G, 4G, and 5G we first need to understand the key features of all these technologies. 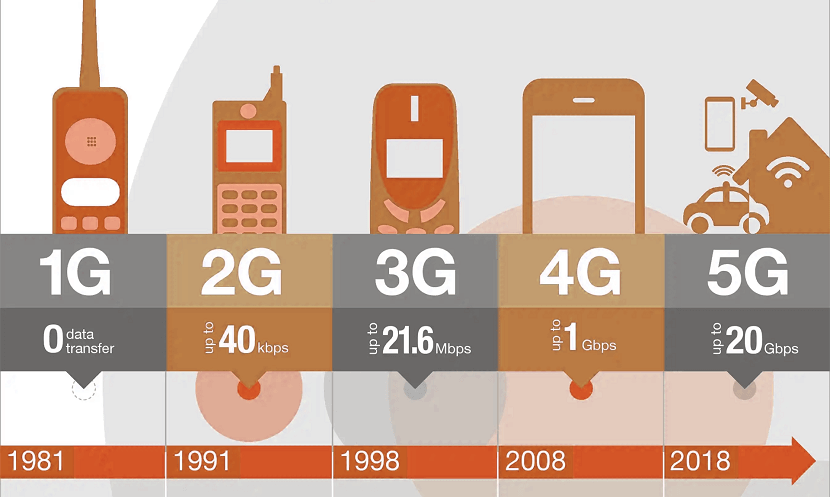 What is 5G (FIFTH GENERATION)?

Low latency is one of 5G’s most important features. 5G uses a scalable orthogonal frequency-division multiplexing (OFDM) framework. 5G benefits greatly from this and can have latency as low as one millisecond with realistic estimates to be around 1 – 10 seconds. 5G is estimated to be 60 to 120 times faster than the average 4G latency.

What is 4G (FOURTH GENERATION)?

Even after it was widely available, many networks were not up to the required speed of 4G. 4G LTE is a “fourth generation long term evolution”, capable of delivering a very fast and secure internet connection. Basically, 4G is the predetermined standard for mobile network connections. 4G LTE is the term given to the path which has to be followed to achieve those predefined standards. Some of the features of 4G LTE are:

How is 5G different from 4G?

How is 5G technology important for India?

1. High speed and digital India: 5G will revolutionise the mobile experience with speedy wireless network, which can support up to 10 to 20 GBPS of data download speed. Compared to conventional mobile transmission technologies, voice and high-speed data can be simultaneously transferred efficiently in 5G. This will enhance and support the government's effort to promote digital India.

2. Better Governance: Better speed and connectivity would reduce red tapism. It will enhance speedy completion of projects and better implementation of policies. It will enable accountability in the system through a better monitoring system and will reduce corruption.

3. Low latency: It is one of the most important features of 5G technology which is significant for autonomous driving and mission critical applications. 5G networks are capable of latency less than a millisecond. This help in logistics improvement and would reduce overall cost of goods and services.

6. Entertainment and multimedia industry: Analysts found that 55% of mobile Internet traffic has been used for video downloads globally in 2015. This trend will increase in future and high definition video streaming will be common in future. This will help in growth of entertainment industry and thus more jobs will be there. It will also increase government revenue.

7. Enhanced Security: 5G wireless technology is one the best solution for security surveillance due to higher bandwidth and unlicensed spectrum. It will enhance better coordination among various agencies. Smart appliances which can be configured and accessed from remote locations, closed circuit cameras will provide high quality real-time video for security purposes.

11. Agricultural applications: 5g technology can be used for agriculture and smart farming in future. Using smart RFID sensors and GPS technology, farmers can track the location of livestock and manage them easily. Smart sensors can be used for irrigation control, access control and energy management.

12. Healthcare and mission critical applications: 5G technology will support medical practitioners to perform advanced medical procedures with reliable wireless networks connected to another side of the globe. Doctors can connect with patients from anywhere anytime and advise them when necessary. Scientists are working on smart medical devices which can perform remote surgery. Smart medical devices like wearable devices will continuously monitor a patient's condition and activate alerts during an emergency.

India should not miss the opportunity and should proactively work to deploy 5g technology. We should focus on strengthening our cyber infrastructure. Funds should be allocated and local technology and telecom firms should be incentivised to develop their internal capacities which would in turn help 5G technology succeed in the country. 5g start-ups that enable this design and manufacturing capabilities should be promoted.

What is 3G (THIRD GENERATION)?

The 3G standard utilises Universal Mobile Telecommunications System (UMTS) as its core network architecture. 3G network combines aspects of the 2G network with new technologies and protocols to deliver a significantly faster data rate. By using packet switching, the original technology was improved to allow speeds up to 14 Mbps. It used Wide Band Wireless Network that increased clarity. It operates at a range of 2100 MHz and has a bandwidth of 15-20 MHz. Some of the main features of 3G are:

What is 2G (SECOND GENERATION)?

2G refers to the second generation of mobile networks based on GSM. The radio signals used by the 1G network were analog, while 2G networks were digital. 2G capabilities were achieved by allowing multiple users on a single channel via multiplexing. During 2G, cellular phones were used for data along with voice. Some of the key features of 2G were:

Each generation in some way has improved over its predecessor. There is a lot of ground to compare the cell networks over. Following is the comparison between 2G, 3G, 4G, 5G.

What is 5G Network and differences between 2G, 3G, 4G, and 5G networks?